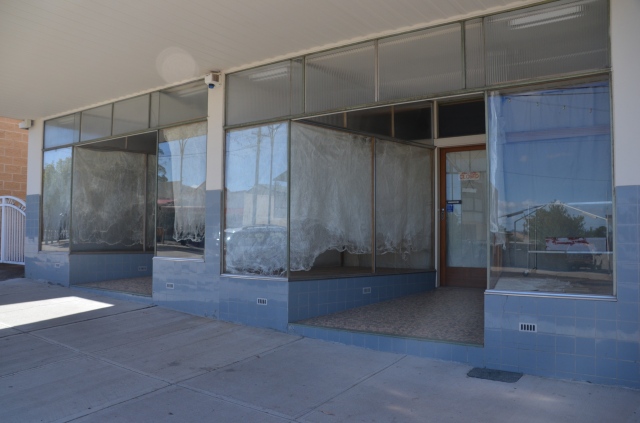 This proved to be one of our more unpopular but highly successful shows in terms of the strong negative reactions the work produced.  The comments of passers by were regularly peppered with expressions like “creeps me out” as people responded on a visceral level to what was intuitively a set of shrouds.  The hand-beaten silk tapa had an uneven ragged and even spidery texture, especially around the edges.  This was suggestive of age, of even a world weariness, a fraying, which, when coupled with the weblike association, called to mind the creepy crawlies which invade places of abandon and the tomb.

Given the shape of the windows, the hanging of the silk tapa cloths effectively created a set of draped coffins.  Also you couldn’t see through the tapa cloth, except at the bottom, and only the bare, wooden boards of floor were visible.  This created a spooky effect of dread, of an absent presence behind the shrouds, shockingly in the bright light of day.  Funereal trappings were thus, by suggestion, displaced from more venerable or hallowed settings like the cemetery or the funeral service, creating a psychic disjuncture, a sense that things were not where they should be, a suggestion of death ostensibly in broad daylight, in the middle of a shopping precinct between the bakers and the newsagents, even though nothing specific was there to be seen.

The texture of the cloth was sufficient to signal that what was covered up was an absence that was somehow obscene, that should belong elsewhere in another location, in another recess of the mind, not mixed in with the shopping, with a meat pie for lunch or a ticket in Powerball.

Yet, the frayed edges of the cloth were also wispy, cloudlike, suggestive of heaven against the framing of the blue tiles of the shops.  A lot of people walked fast, unusually not liking to linger but making a deliberate show of averting their eyes.  Maybe this was out of an intuitive, deep seated habit, produced by the unconscious not wanting to admit what it didn’t want to be reminded of – of passing, of stories of angelic choirs and hosts.  Only one window permitted a view into what was behind the cloth and that revealed a stainless steel hospital gurney on which was placed a rectangle the size of a 1960s laundry box, the kind that half a dozen pressed shirts used to be delivered in.  This rectangle was covered in white cloth on which fuschia-coloured blood cells had been enlarged.  This was effectively a lightbox which glowed more dramatically at night and recalled the hospital, the emergency room and even intensive care, the hovering of life.

This last window was most definitely on the side of life, however fragile.  The bright red blood was vivid, blooming like so many flowers, joyous even, like the pattern on a 1950s sundress, against the reminder of the coldness of hospital stainless steel.

The artists in the town and adjoining Rylstone reviewed this work most favourably, appreciating the artistry that went into the making of the cloth as a kind of dedication, a funereal offering from a daughter to a father.  The fine tanglings of the silk skeins are wild and unpredictable, in the tradition of abstract expressionist painting,  but released from the frame to hang freely and do double duty as installation, as shroud and curtain.  It takes a certain training to spot the art references, the layerings in this work of mourning.  The intervention of the hospital, mediating between life and death in the lives of many in our aging population, inserts a contemporary commentary on the metaphysical aspects of dying, and the triangulation of medical profession with the meeting of one’s maker.  Maybe it was the  reminder of the hospital gurney in conjunction with the clouds/shroud/curtains which spooked the passers by.

Representation of death doesn’t belong in the bustle of the street, nor does the hospital bed.  Even though the installation elements were pristine, the blood almost pretty, the textures of the silk tapas beautiful, aestheticized, the sense of what you don’t want to be reminded of, much less to know, still seeped out.  The unconscious was innocuously out in the street in a hue of wisps of whites and blue.  Borders not usually breached were suddenly permeable.

This entry was posted in Artists. Bookmark the permalink.